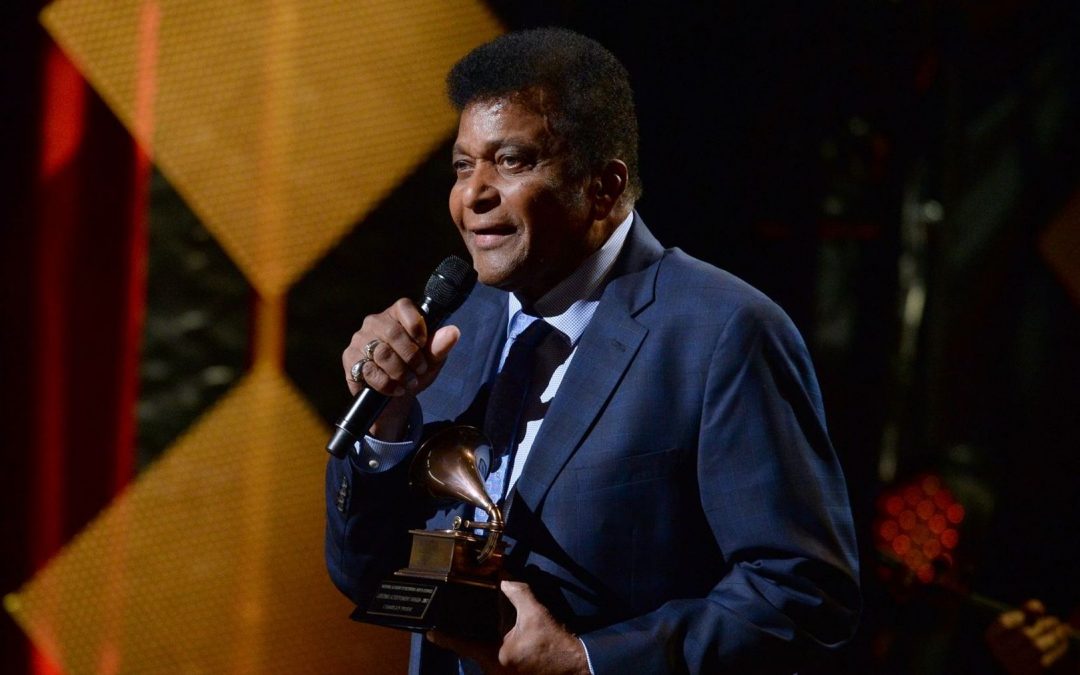 Charley Pride, whose accolades include membership to the Country Music Hall of Fame and the Grand Ole Opry, as well as the CMA Entertainer of the Year award, is considered country music’s first African American superstar. He scored 29 No. 1 hits between 1969 and 1983 and charted 67 singles in his groundbreaking career.

Charley Frank Pride was born into a sharecropping family in Sledge, Mississippi, on March 18, 1934. He recalled walking four miles to and from a segregated grade school while white children passed by in school buses. Because his father scorned the roughness and ribaldry of blues music, Pride grew up listening to the Grand Ole Opry and idolizing such stars as Roy Acuff and Ernest Tubb.

As a teenager, he bought his first guitar from money earned picking cotton. Two years later, he quit school to play professional baseball in the Negro American League and emerged as a star pitcher. Then he joined the Army, in which he served for two years. He married his wife, Rozene, over Christmas break in 1956.

He returned briefly to baseball upon his military discharge in 1958, playing for the Pioneer League, before moving on to work in a smelting plant in Helena, Montana. It was there in 1962 that singers Red Foley and Red Sovine heard him singing a Hank Williams song and urged him to come to Nashville.

Pride did so, walking to Cedarwood Publishing (which booked Sovine’s shows) after being dropped off at the Greyhound station in Nashville. There he happened to meet Cedarwood’s Jack Johnson, who recorded a few tracks, agreed to be his manager, and tried in vain to get him a label deal. However, it wasn’t until a 1965 introduction to maverick Nashville producer “Cowboy” Jack Clement that things started to happen.

Impressed by Pride’s formidable baritone voice and Hollywood good looks, Clement recorded some songs on the new prospect and sent them to Chet Atkins, who then headed RCA Records’ country division. The Civil Rights movement was just beginning to heat up at this point, but as others before him had been Atkins was so drawn to Pride’s voice and demeanor that he signed him in 1966. The label initially billed him as “Country Charley Pride.” At first, Pride’s singles were sent to radio stations without the usual publicity photo enclosed.

He charted his first single, Clement’s composition “Just Between You and Me,” in 1966. It went Top 10, and five of his subsequent six releases went Top 5. In 1969, he had his first No. 1 with “All I Have to Offer You (Is Me).” From then on, until his chart successes began tapering off in the mid-1980s, most of his RCA singles hit No. 1 and only rarely ranking less than Top 5. His albums routinely were certified gold, signifying half a million copies.

Throughout his career, Pride performed without any visible chip on his shoulder, seeming to dismiss any racial roadblocks with easygoing humor (often quipping about his “permanent tan”). But he was not oblivious nor impervious to racial slights. In the 2019 Country Music documentary on PBS, he revealed that RCA was particularly vigilant in his choice of love songs to record. He said he wanted to record “The Green Green Grass of Home,” but that the label balked because of the line, “Down the road I look and there comes Mary/ Hair of gold and lips like cherries” since the “hair of gold” marked Mary as a white woman.

Pride made his Grand Ole Opry debut in 1967 and, after repeated invitations to join the cast of the revered radio show, finally did so in 1993. His 1971 hit, “Kiss an Angel Good Mornin’,” topped the country charts for five weeks and earned a song of the year Grammy for its writer Ben Peters (and a nomination for Pride as a singer). It also rose to No. 21 on the pop charts.

Pride won three performance Grammys — two for gospel and one for country — as well as a lifetime achievement Grammy in 2017. In 1971, the Country Music Association voted Pride its Entertainer of the Year, as well as its Male Vocalist in 1971 and 1972.

A canny businessman, Pride invested well in real estate, banking, music publishing, talent booking and management. Many country acts that would later become famous were mentored by Pride and opened shows for him, including Janie Fricke, Neal McCoy and Dave & Sugar.

In Pride’s case, his hits really are too numerous to mention, but among them are “Is Anybody Going to San Antone,” “I’m Just Me,” “Afraid of Losing You Again,” “It’s Gonna Take a Little Bit Longer,” “Hope You’re Feelin’ Me (Like I’m Feelin’ You),” “My Eyes Can Only See as Far as You” and “She’s Just an Old Love Turned Memory.” Pride reached the Top 10 at country radio 52 times.

In 1985, Pride had a very public falling out with RCA, quitting the label, he said, because it was paying more attention to its younger acts than its established ones. Although his chart presence ended in 1989, he continued to record for various smaller labels and make appearances. He was inducted into the Country Music Hall of Fame in 2000.